We have been informed that the Property Practitioners Act may be promulgated on the 1st of April 2021, and if not, very soon thereafter.  In terms of the Act conveyancers will be prohibited by law to pay commission to anyone not being able to present an FFC.

Thousands of agents are at risk, most often due to EAAB malfunction.

As if the COVID-19 pandemic is not enough, our industry has to continuously contend with one calamity after the other courtesy of our Regulatory Authority.

The question of what is going right or well is quite frankly hard to answer.

Rebosa has since inception been focusing on providing support, interacting and engaging with the EAAB but has come to the conclusion that matters are getting worse year after year instead of better.  As a matter of course the IT system gets blamed for all of the EAAB’s failings, yet a promise made in 2017 to replace the system may only now be put into operation.

These continuous shortcomings have compelled us to resort to legal action.

We have brought an urgent application against the EAAB in an effort to ensure compliance with the Act and Regulations.  The EAAB chose not to answer most of the issues raised in our founding affidavit but many FFC’s were subsequently issued after launching of the action.  This of course negates the CEO’s statement that all FFC’s were issued timeously, that is before 31 December 2020.

We are confident of a positive outcome, but at the same time we realise that court cases often revolve around technicalities.

From a legal point of view we had to launch this application on behalf of a number of individuals but our object was and is to address the challenges the entire industry faces.

We will keep you abreast of the outcome and we thank you for your ongoing support.

The POPI Act commencement date was 1 July 2020.  A 12 month grace period was granted before enforcement of the Act.  STBB have kindly assisted Rebosa draft a manual on POPI with specific reference to the real estate industry for our members.  Please access the revised manual and annexures/forms by clicking the link below.

Further information can also be found on https://popia.co.za/

Penalties Imposed by the EAAB

We have received many complaints from agents who wish to return to the industry but are now faced with heavy penalties (R240 per month) which need to be paid before they can re-register and obtain a valid FFC.  This is because they did not deregister from the EAAB when they left the industry.

We obtained legal opinion to the effect that no provision in the Act or any of the regulations  empowers the EAAB to impose such penalty on any person for failing to notify the EAAB that they have stopped acting as an estate agent i.e. where an estate agent failed to apply for a renewal of an “FFC” in circumstances where they elected to stop being an estate agent – they simply allowed the yearly deadline of 31 October to expire without notifying the EAAB.  The legal opinion asserts that any such penalty imposed by the EAAB is simply unlawful.

This opinion was communicated to the EAAB on 2 July 2020 and the EAAB has written to Rebosa on 1 March 2021 (8 months later) confirming that this matter is receiving the attention of their lawyers and the lawyers have said it will take time to review and respond.

Until such time as we receive a written response and a decision is forthcoming, Property Practitioner’s facing this dilemma will have to pay the penalties in order to receive an FFC.

Increases to the National Minimum Wage from 1 March 2021

The Department of Employment and Labour (DEL) has announced increases to the national minimum wage that will come into effect from 1 March 2021.  These increases follow the recommendations made by the National Minimum Wage Commission in late 2020.  The National Minimum Wage (NMW) for each ordinary hour worked has been increased from R20,76 to R21,69 for the year 2021 with effect from 01 March 2021.  The DEL also announced increases to learnership allowances.  Workers who have concluded learnership agreements are entitled to allowances as determined by the national qualifications framework level.

We are aware of all the technical problems candidates writing the PDE on 25 February were faced with.  Please be assured that Rebosa are taking this up with the EAAB.  It has been communicated to us that the EAAB will be investigating each case and all candidates will be advised of the feedback.  We will ascertain the timeline for this and provide you with feedback after further consultation.

The EAAB have announced the following dates for the PDE 2021 calendar. 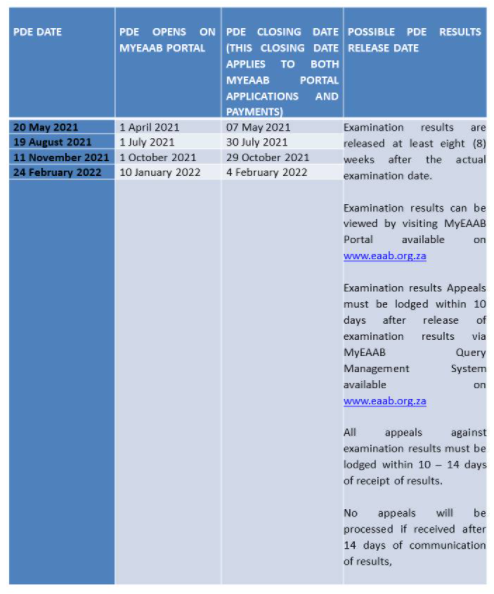 The Property Transformation Forum (“PTF”) is an initiative of The South African Institute of Black Property Practitioners (“SAIBPP”) and the Real Estate Business Owners of SA (“REBOSA”).  The PTF is a working group of like-minded black property practitioners who have a passion for propelling transformation in SA and who are frustrated by the hurdles that currently exist and which stifle progress.

We're not around right now. But you can send us an email and we'll get back to you, asap.